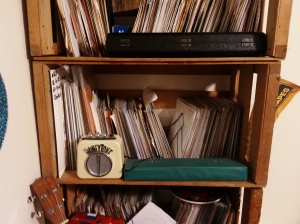 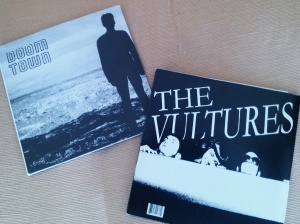 Nothing sums up the greatness & coolness & fun of the 45 better than the split. “You like records?” the split says, “These guys like records, too, & they’re friends, & they put out a record together! How cool is that?” Fun!

Big Muddy Records’ first vinyl release, & the last release they put out for a while, if memory serves, was the 2006 split between St Louis’ Vultures & Columbia MO’s Johnny O & The Jerks. The sometimes charmingly chaotic & sometimes, well, just sloppy Vultures turned in probably their best song & recording with the garage shouter “Obselete,” while Johnny O pointed towards his future Hooten Hollerin’ (see the review of their latest 45 back in whatever issue of this thing that was in)with “Animal.” Both bands cover a song by the other band, too. A really great 45 all around. Fun!

Up now in the now times, all the former Vultures are touring the world, Ryan Koenig & Joey Glynn as part of Pokey Lafarge’s band, & Ashley Hohmann with Doom Town, who dropped a split in late 2013 with their Hamburg, Germany-based tour-mates No More Art. Doom Town’s side is all angst & gloom & dark post-punk cool, with the frantic claustrophobia that their best songs convey. No More Art lets a little more light in, but still keeps the mood close to panic on their side, as well. Fun!